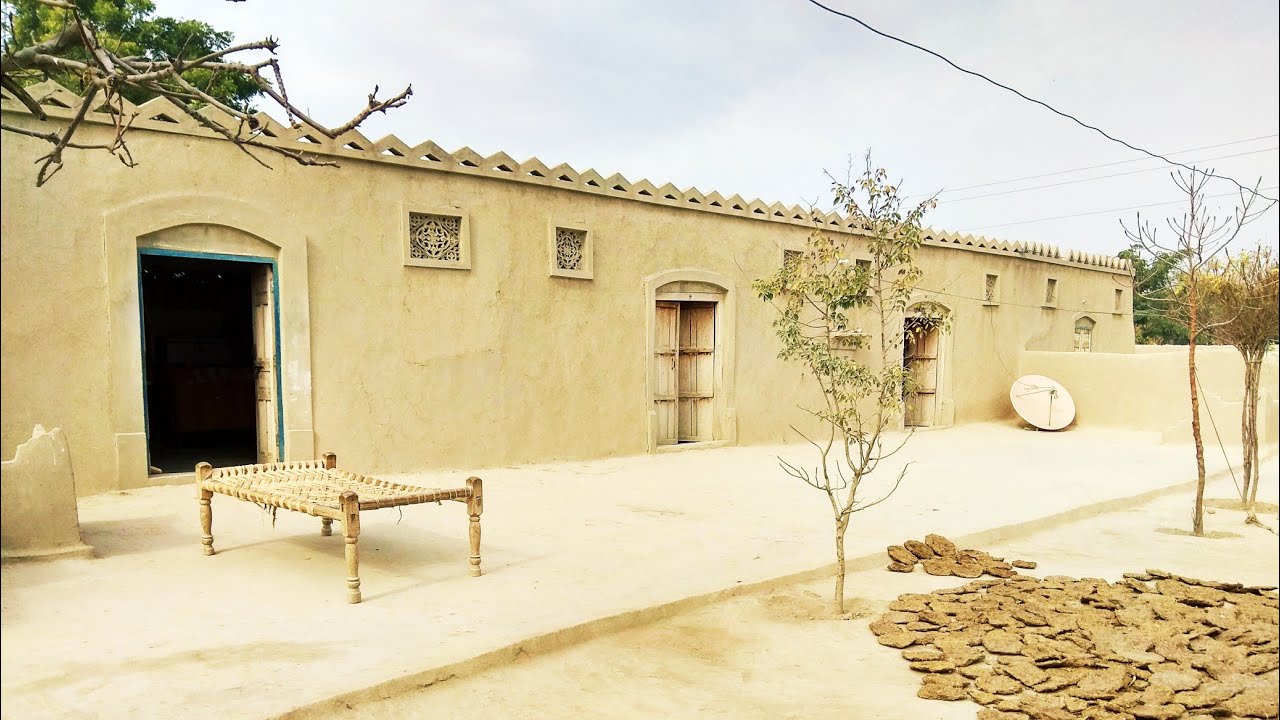 The mud house was built somewhere in the countryside around the year of 1800. Nobody knows exactly when  and who constructed the house and which generation had lived in our original ancestor house which is still located in Punjab, North of India. I often tagged along with my uncle whenever he visited the house. I often asked him,”chachu, chachu, who used to live in this house.” I doubt if he knew either but he always said, “A warrior lived in this house.”

My ancestor warrior was  martyred fighting against the British govt for the freedom of country near army base camp.  This information was good enough for me to get happy going to the mud house. The mud house was like an old fortress whose walls were built with clay or mud. Even the roof of the house was built with mud.  The entire house except the doors were built with mud. There was only mud or wood used to construct the house. The surrounding houses were also old style which were unoccupied. None of the children liked going toward that side of the town except me and my cousin, Binu.

Inside of mud house, I always felt very cold and peaceful. It often came into my mind that the ghost of my ancestor still wanders in the house. The main door was built with solid wood and decorated with yellow colored metal plates and flowers. The main door directly opened  into the great huge lobby. The old style kitchen was built on one side of the lobby while  the hand water pump was on the other side. I tried many times pumping up the water but there was always no luck. Now, it was presented like a decoration piece only. I didn’t see the bathroom anywhere.  I am not sure how they used to take a bath. Maybe they used a curtain or something like that but there was no indication of the bathroom. The lobby was huge, and this portion of the house was used a lot more than any other portion of the house. In the lobby, there were two cots which were built with solid wood and thread. I didn’t see any chairs. My uncle told me there were no chairs in the past. People used to sit on the cots only. The lobby was clean and empty except for those two large cots.

At the end of the lobby, there were another two large rooms. I doubt anybody ever slept inside of those rooms. Both rooms were full of clutter, however the lobby was empty and clean. Both rooms were also locked from outside. I tried convincing my uncle to open the door so I could look inside. Well, it was never easy to convince him.

After the rooms, there was another attached portion where my cousin’s ancestor had lived. The adjoining portion had a similar layout. Both houses shared the same courtyard. When my chachu opened the door for the first time, it was the happiest day for me. I was in such a hurry to get in when he was trying to open the door. I rushed into the room. Chachu couldn’t even complete his sentence,”Munna wait” I didn’t know what he said but I was already in.

One room was full of clutter, but the other one had two large metal boxes. Both boxes were also locked from outside. The locks had to tell their own story if anybody ever touched or cleaned it. I encouraged my chachu to open the boxes. I said, “maybe it is full of gold or diamonds”. There was no key so we had to break the lock which was not an easy task. My uncle said, “Munna your curiosity always makes me work hard”. Anyway, we found swords, knives, and other metal weapons inside the room. Both of us laughed to find old style weaponry.. I wanted to keep some of the stuff but my uncle said, “no, put it back.” In the second box, there were handmade bedsheets and pulkari and bagh (in ancient times, women used those to cover themselves during ceremonies or festivals. Each of those had beautifully decorated with handcrafted and multiple colors thread. I am not sure if they belonged to my great grandmother or great great grandmother. However, now they are mine after my uncle died. I brought those beautiful ancient pieces with me. They still look brand new. The time neither wear of their color nor the cloths

I often went with my uncle  to the mud house. There was a strange peace and cold inside the house as I mentioned earlier. There was no window. No electricity. I sat there to imagine how my ancestor had lived without modern innovations. How was their lifestyle so simple? Their needs must be very minimal. I imagined if anybody slept inside of those rooms. My uncle didn’t know either if anybody else lived in the house. My father and uncle were also born in another house which we called Haveli.

The roof often leaked during the rainy season so uncle shifted some of the stuff to Hevali but rest he donated it. Suddenly my uncle decided to demolished the house for safety reasons.

I was in boarding school when it happened. I went after the demolition, it was a plane land now. Both my and cousin side of the portion was demolished, and the soil was used to raise the foundation up. Now, the mud house was turned into a beautiful plot inside the downtown. The price of the house increased up significantly but my uncle refused to sell it.

Binu moved to the USA first, and I followed him a few months later. However, The twins (Binu’s older siblings) had moved to the USA after Binu died. They never went to our ancestors house but their late brother Binu, my uncle, and I were the ones who always went there. The three of us loved our ancestor’s home. So the twins never have any interest or attachment with our ancestor’s place. Before the twins moved to the USA, they had sold our transport business. Neither my mother nor my aunt was ready to keep up with the business. The twins needed the money to settle down in the USA.  Three of us also acquired four houses when my mother died. We had sold two houses but we planned to keep at least two of them in which was a mud house and the second where we grew up.

Last time, I met the twins for a few minutes when my mum was sick.  Recently, I received a rerouted call from the twins. The realtor has called multiple times so we can sell it. The Twins couldn’t make the decision so they rerouted the call to me.

I didn’t not know when the words came out of my mouth, “no, I am not planning to sell my ancestor yet.”

My children went once to my native country when they were just infants. I doubt they will ever visit again. Neither the twins nor their children went back since my mother died.

People are greedy now, so it was time to think about our mud house. One of the twins has got a wonderful idea to build the same house. I was the only one who knew the internal layout. I was surprised after many years, I still remember each corner of the mud house.

The mud house will be rebuilt with bricks and marbles instead of mud but the design will be the same. It will cost us a lot but nothing is more important than keeping the memories. We all agreed, it will still be called a mud house and we will use it for community purposes.

11 thoughts on “My Ancestor’s mud house”